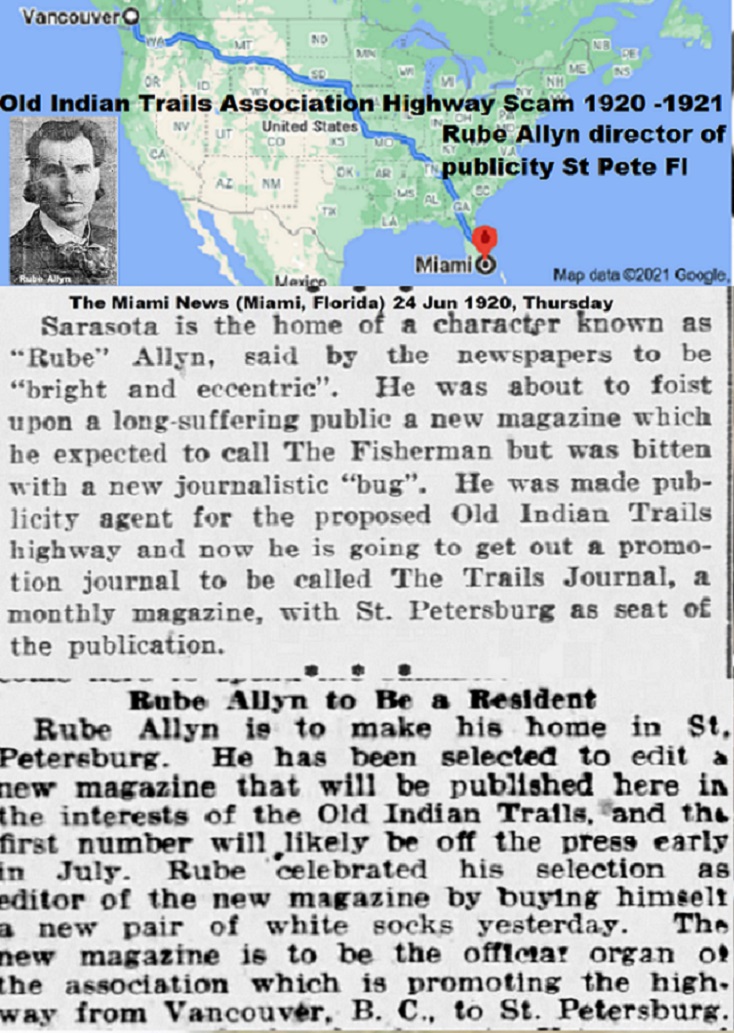 SCAM ALERT: Harry Higel Murder Suspect Rube Allyn was Director of Publicity for Old Indian Trails Association Highway Scam in 1920 Out of St Pete. In June 1920 Harry Higel murder suspect Rube Allyn, from his office in the Detroit Hotel St Pete, was the Director of Publicity for the 'Old Indian Trails Association' that sought the building of a highway from west coast seaport Vancouver in British Columbia Canada to Miami Fl with part going through Tampa, St Pete, Bradentown, Fort Myers, over 4,000 miles, NEVER HAPPENED. Turns out the 4,000 mile intercontinental Old Indian Trails Association "highway" was a scam, there never was any such highway in 1920 or 1921. It was all cooked up by L. A. Whitney, Chester Val-Rez aka Valrez, and Rube Allyn, the "highway" never broke ground, it never existed, it was a scam. Chester Val-Rez and Rube Allyn were “Irish Travellers" fraudsters, swindlers, con men. In July 1920 L. A. Whitney was appointed the first President  of the 'Old Indian Trails Association', he was also Secretary of the Pinellas County 'Board Of Trade' for several years. Chester Willington Val-Rez aka Valrez, and Rube Allyn scammed thousands of dollars out of unsuspecting business men all over the state of Florida. 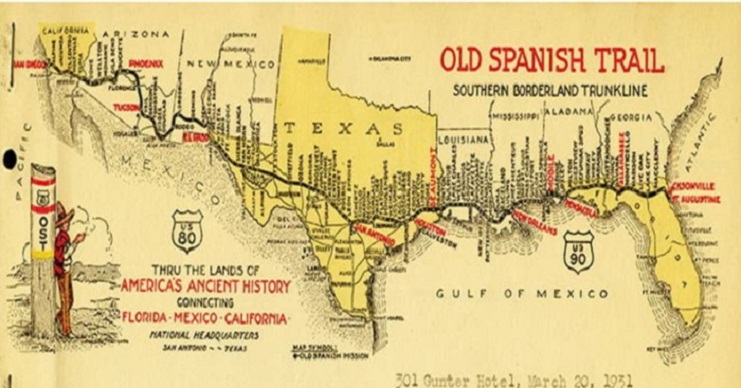 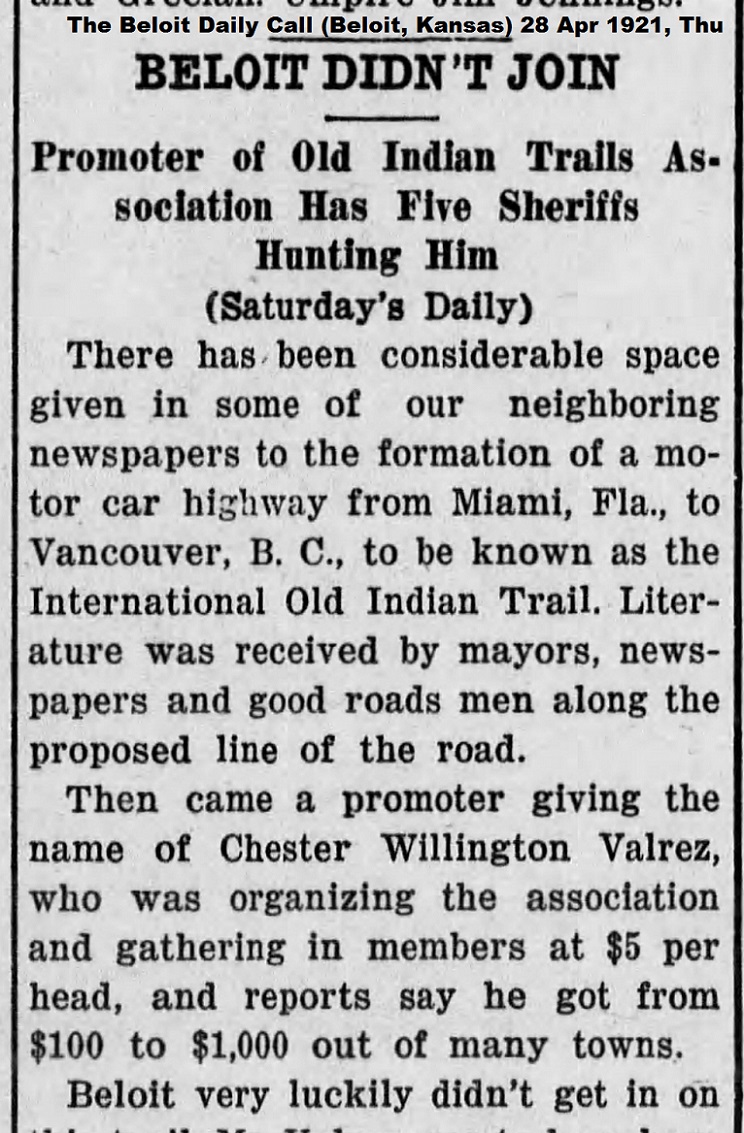 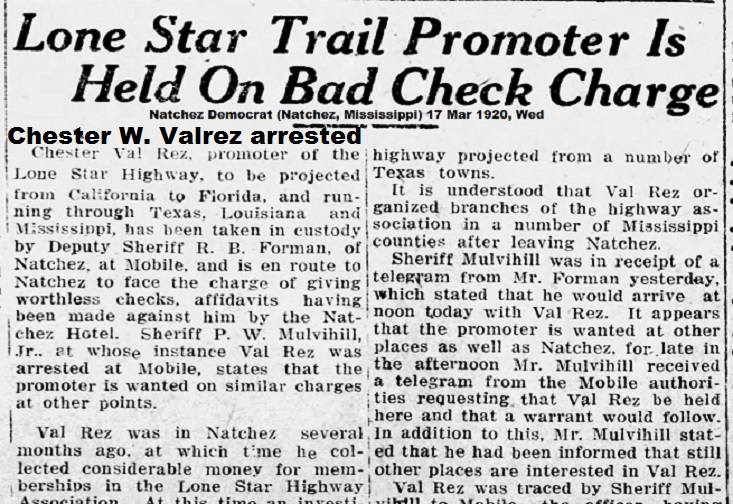 On March 17, 1920, Old Indian Trails Association highway promoter Chester Willington Val-Rez was arrested by Deputy Sheriff R. B. Forman of Natchez Mississippi for passing bad checks. Chester Val-Rez had been in Natchez Mississippi several months ago and collected considerable money for the Lone Star Highway Association, play on name of Old Indian Trails Association highway, he also passed bad checks in Mobile. So besides scamming business men out of thousands of dollars for the non-existant nationwide highway, Chester Val-Rez was passing bad checks at the hotels where he was staying, Sheriff's in Texas were also looking for Val-Rez. 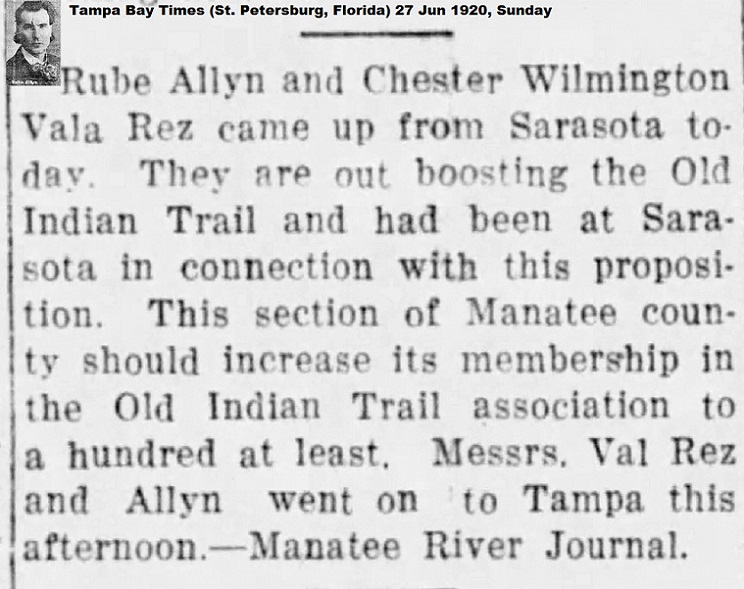 3 months after his arrest in Natchez Mississippi on bad check charges Chester Val-Rez and his pal Rube Allyn are in Sarasota Fl on Saturday June 26, 1920 running their Old Indian Trails Association highway scam. Chester Val-Rez and his pal Rube Allyn left Sarasota Sunday morn June 27 and went to Tampa to meet with the Board of Trade. Sarasota mayor Harry Higel had been influential with the U.S. Corps Of Engineers to get roads built on Siesta Key. Harry Higel as mayor of Sarasota was involved in getting streets paved and building roads and promoting the area, legitimately. I wonder if Harry Higel found out that the Old Indian Trails Association highway was a scam and confronted Rube Allyn about it. Either way Rube Allyn was the con man's con man to the end. 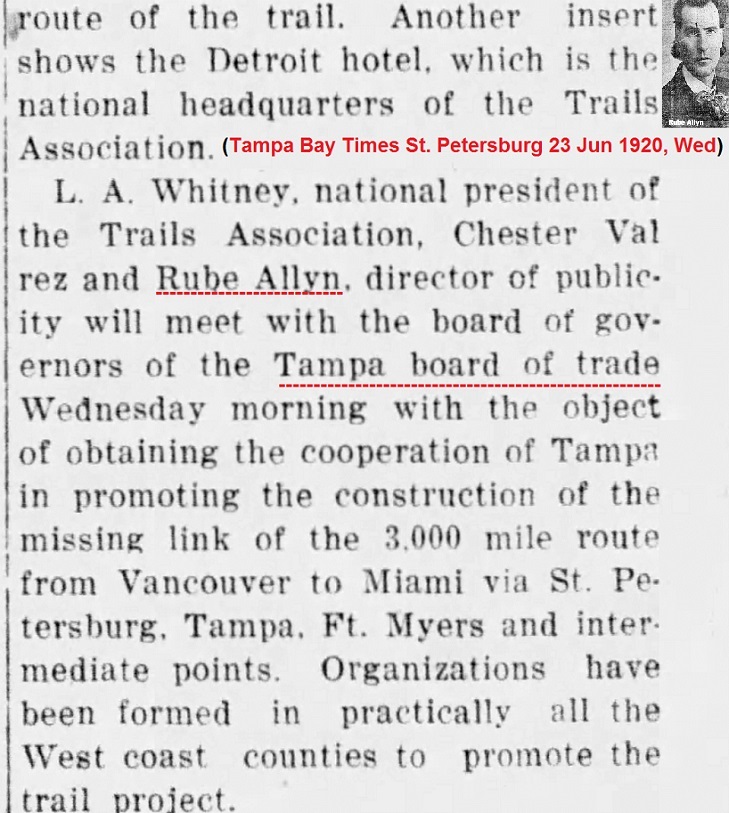 Rube Allyn was the poster boy for the 'Old Indian Trails Association highway' SCAM from Vancouver CA to Miami Fl in 1920 but he could not even traverse a road to his own house on the northern tip of Siesta Key because his neighbor Harry Higel had erected a fence across the road that led to Rube Allyn's house, talk about irony. Rube Allyn must have been extremely irate when he came back from St Pete late at night on Thursday Jan 6th, 1921 and found the gate locked on the fence that blocked his way to his house on the northern tip of Siesta Key. After Harry Higel was murdered early in the morn on Friday Jan 7th 1921 the Sarasota council members pushed even harder to separate itself from Manatee County, sighting the ineffective investigation of Higel's murder by the Manatee County Sheriff Dept and Bradentown Public Officials. It should have been a slam dunk to indict murder suspect Rube Allyn but it turned out to be a farce with the Manatee County Grand Jury issuing No True Bill after a 10 minute deliberation, a real 'Kangaroo Court'. Sarasota County Centennial 100 Years is July 2021, mishandling of unsolved murder of Sarasota Mayor Harry Higel by Manatee County Grand Jury caused split form Bradentown Politicians.

OLD INDIAN TRAILS MAGAZINE by RUBE ALLYN failed in early 1921 because promoter Chester Val-Rez had been arrested for fraud and bad checks in several southern states and the editor Rube Allyn had been arrested for the murder of former Sarasota mayor Harry Higel on Jan 7th, 1921. The Old Indian Trails Highway itself was a scam it never existed, it was perpetrated by Chester Val-Rez and Rube Allyn who both kept any of the cash payments for subscriptions. 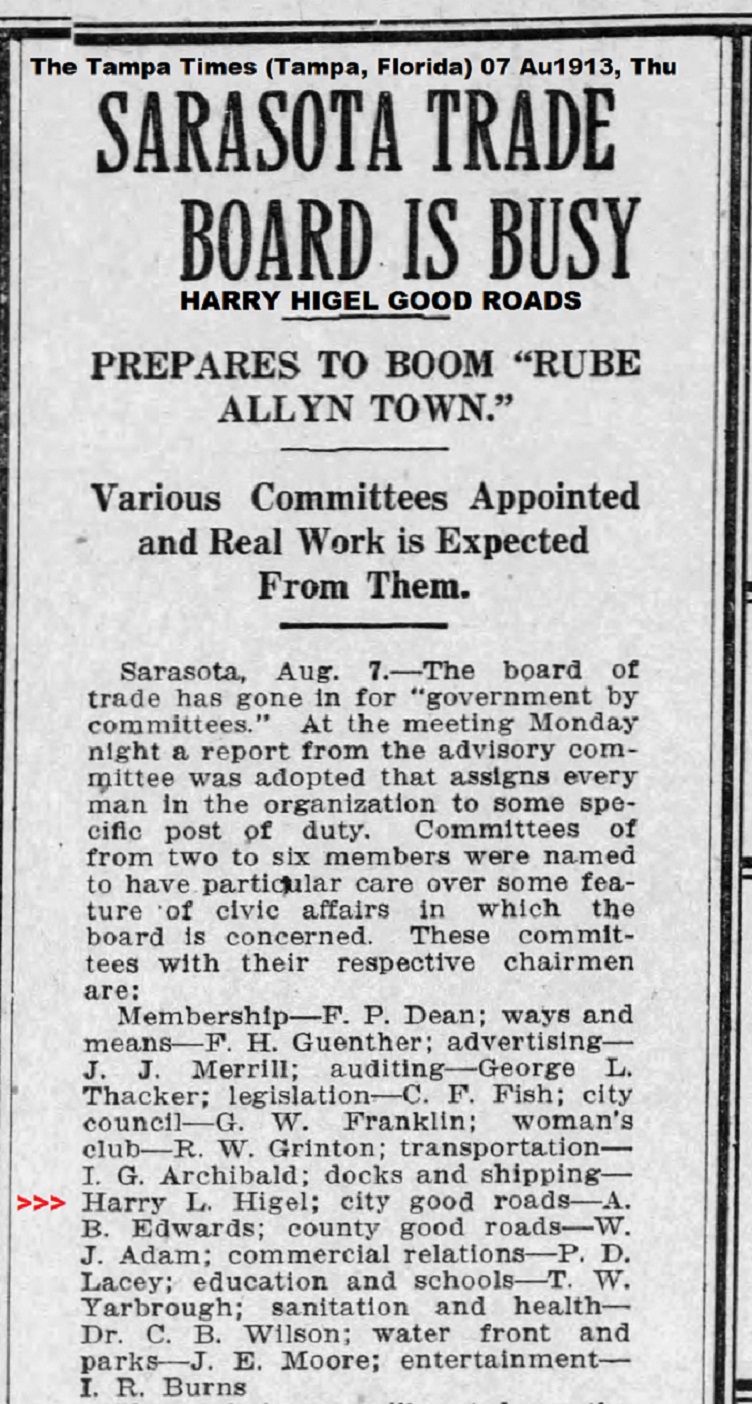 Harry Higel along with local businessmen A. B. Edwards and R.W. Grinton from the Sarasota Trade Board were active in the 'Good Roads Movement' from at least 1913. Harry Higel was one of the "good roads" supporters in the construction of better roads between Sarasota, Venice, Bee Ridge and Fruitville. Harry Higel would have called out Rube Allyn when it was found that the  Old Indian Trails Highway association was a scam, no such highway ever existed! As of June 1920 Harry Higel murder suspect Rube Allyn, from his office in the Detroit Hotel St Pete, was the Director of Publicity for the 'Old Indian Trails Association' that sought the building of a highway from west coast seaport Vancouver in British Columbia Canada to Miami Fl with part going through Tampa, St Pete, Bradentown, Fort Myers, over 4,000 miles, NEVER HAPPENED.