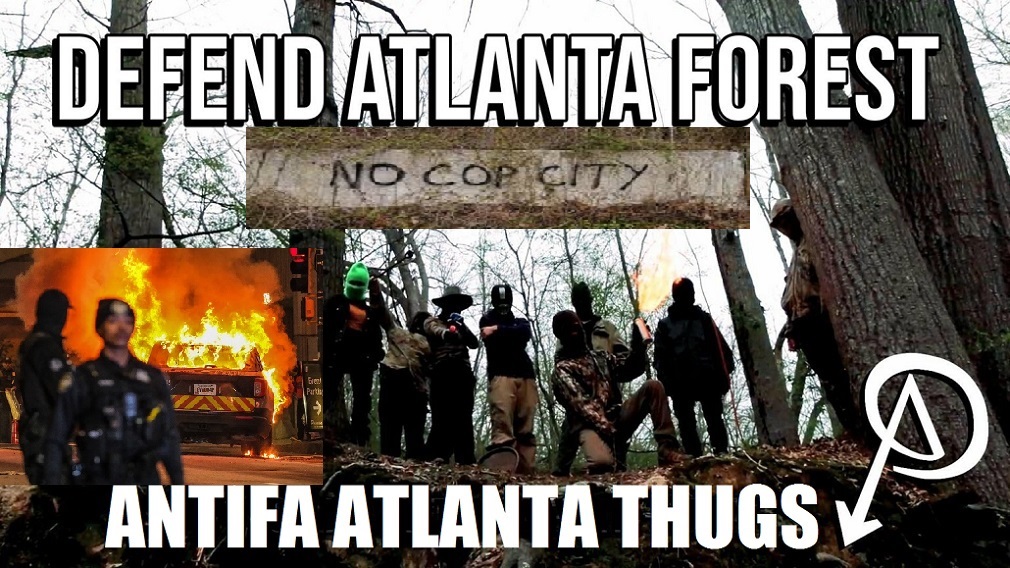 Joe Rogan accused members of the mainstream media of acting like a “propaganda department” this week while taking issue with some recent coverage of violent anti-police protests in Atlanta in recent days by Antifa thugs. “The Joe Rogan Experience” host slammed media portrayals of the Atlanta protests and similar situations of so called "peaceful demonstrations" during a discussion about the rise of media bias and tribalism in public discourse. “‘Mostly peaceful, oh it’s mostly peaceful.’ I f—king saw someone again say this, because of what happened in Atlanta,” Rogan said during Wednesday’s podcast. “They were calling it mostly peaceful, bullcrap. You’re not the f—king propaganda department, you can’t define things in a way to calm people down.” Antifa Atlanta Thugs Shoot Cop Burn Shops and Cars Destroy Property in Name of Defend Atlanta Forest. 'NIGHT OF RAGE' in Atlanta: Six far-left Antifa extremists face charges including domestic terrorism and rioting in the aftermath of clashes between police and protestors that has left $50 million in property damage. ANTIFA THUG REPORT: "For just over a year, people in Atlanta have been resisting the destruction of hundreds of acres of precious forest to build a massive police training facility and a Hollywood sound stage. By combining forest defense tactics with tactics learned through mass participatory urban struggle they have forged a new paradigm in the fight against climate change, police violence, and colonialism. They are now calling on people everywhere to join them". 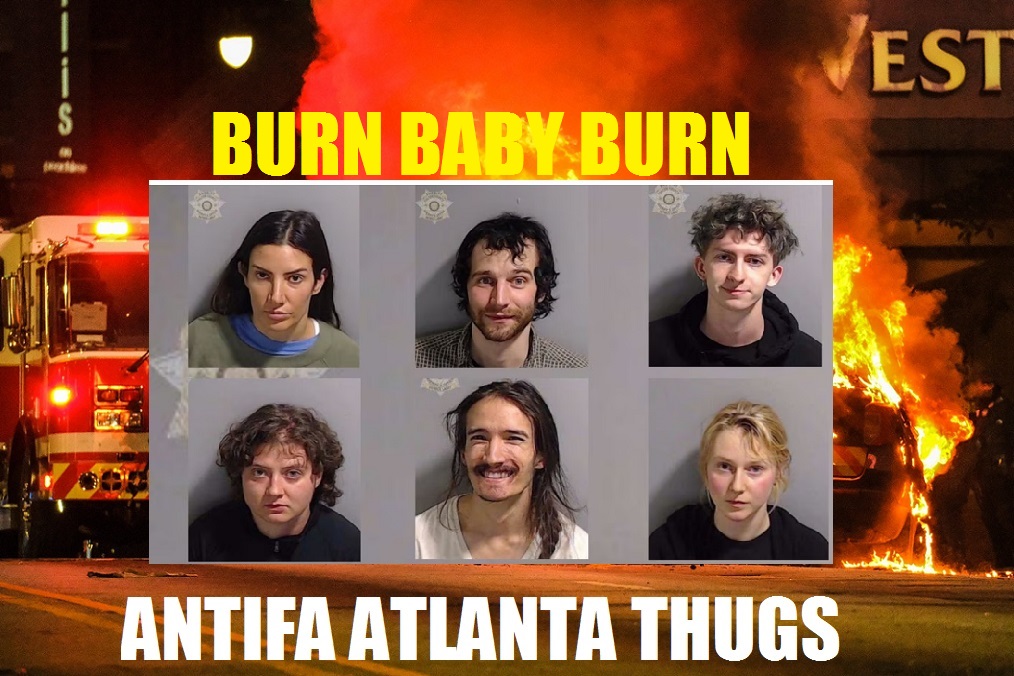 Six Antifa Extremists Arrested, Charged with Domestic Terrorism in Fiery Atlanta Riots. Protesters descended upon Atlanta following the death of Manuel Esteban Paez Terán (“Tortuguita”), a climate activist who was killed during a violent confrontation with police earlier in the week. Five of the six people arrested came from out of state to cause mayhem. One of the arrested, Francis Carroll, was out on bail for domestic terrorism and is the son of a wealthy Maine family, according to investigative reporter Andy Ngo. Seven others were arrested and charged with domestic terrorism and criminal trespass, with additional charges pending. They include:Geoffrey Parsons, age 20, of Maryland, Timothy Murphy, age 25, of Maine, Spencer Bernard Liberto, age 29, of Pennsylvania, Matthew Ernest Macar, age 30, of Pennsylvania, Sarah Wasilewski, age 35, of Pennsylvania, Christopher Reynolds, age 31, of Ohio, Teresa Shen, age 31, of New York. The occupy antifa protestors, who call themselves forest defenders, are claiming police have 'murdered' one of their own and are demanding 'action'. The Antifa riots in Atlanta coincided with similar demonstrations that took place Saturday night in Boston. Protesters vandalized a monument in the Boston Common and assaulted a police officer following the fatal police shooting of a university student in December 2022. 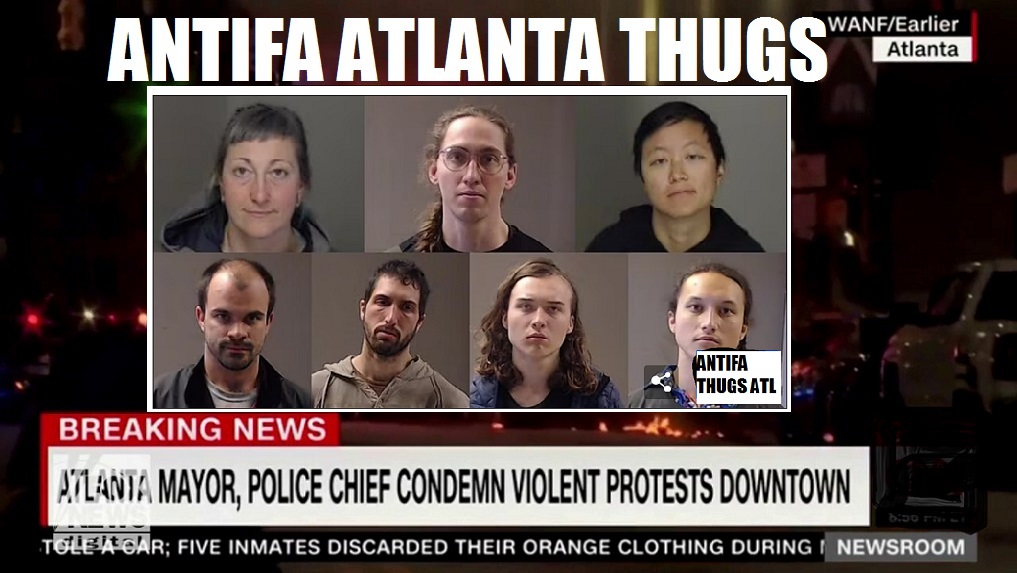 Two of the six suspects arrested during a riot in downtown Atlanta Saturday evening have been granted bond Monday morning. A Fulton County Court judge granted both 23-year-old Ivan Ferguson of Nevada and 20-year-old Graham Evatt of Decatur, Georgia bond of over $355,000. The other four suspects Nadja Geier, 24, of Nashville, Tenn.; Madeleine Feola, 22, of Spokane, Wash.; Francis Carrol, 22, of Kennebunkport, Maine; and Emily Murphy, 37, of Grosse Isle, Mich. were denied bond. Posts from far-left extremist Pittsburgh group, Filler Distro. Filler Distro is one of several groups calling for violent retribution against law enforcement over the death of one of its members. Filler Distro tweeted a call for 'retaliation' against police with further instructions from its now suspended twitter account 'Scenes from the Atlanta Forest.' According to screen shots obtained before the account was suspended, it said: 'Consider this a call for reciprocal violence to be done to the police and their allies. @defendatlantaforest' account. 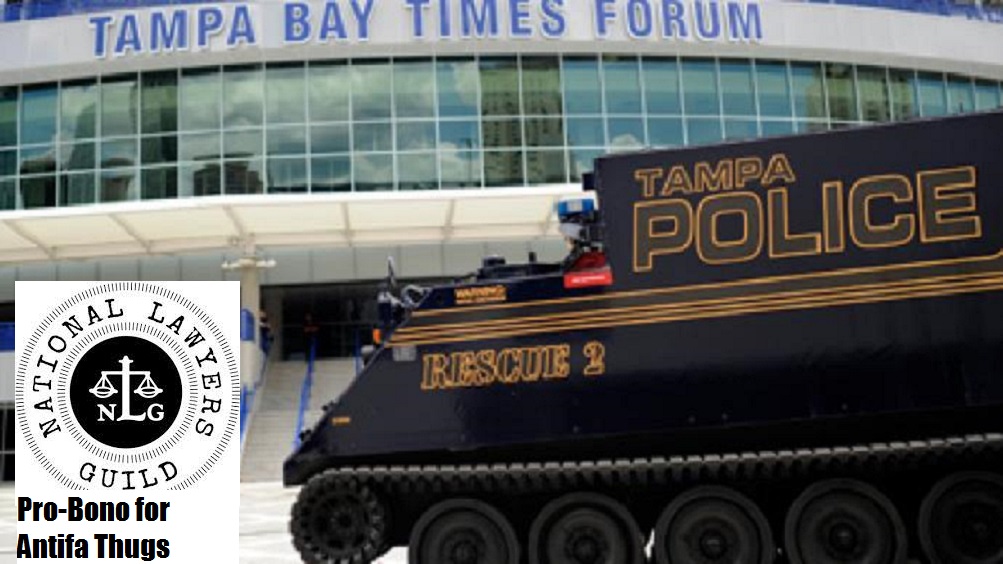 ANTIFA BACK-UP: The NLG will continue to support anti-fascists and anti-racists in the street and in the courts, and will not be swayed.August 23rd 2012 RT NEWS, Scared of Anonymous: Tampa police prepare for mass arrests during Republican convention. Political activists and an underground army of anarchists, (ANTIFA), were preparing to overthrow next week’s Republican National Convention in Tampa. In downtown Tampa’s North Florida Ave. this week, authorities discovered a pile of bricks and pipes on a businesses’ rooftop. Near the scene of the “crime” was a graffiti portrayal of Guy Fawkes, the British revolutionary whose likeness has been adopted by both Anonymous activists and Occupy Wall Street protesters. Florida-based private investigator Bill Warner doesn’t see the bricks and pipes as possible construction site components, but weapons or destruction to be thrown at police. Bill Warner writes, “Anonymous and Black Block dirtbags seek the overthrow of the US Government, they hate cops and everything they stand for and seek to disrupt the Tampa RNC. Six buses from NY filled with ANTIFA thugs were ready to come to the Tampa RNC but were turned away due to hurricane Issac. Sheriff Gee has a simple warning, posted on the county website in an open letter “to the agitators and anarchists who want only to bring a dark cloud” to the RNC: “criminal activity and civil disturbances will not be tolerated and enforcement actions will be swift. The National Lawyers Guild is a radical-left association of attorneys, law students, legal workers, and jailhouse lawyers. Founded from late 1936 to early 1937, the Guild has consistently been identified with radical-left groups and political orientations throughout its history. In its early years the National Lawyers Guild was significantly influenced by communist members, which quickly led to the resignation of most of its non-communist liberal members. Today, the National Lawyers Guild is best known for the legal support and training that it provides to left-wing demonstrators. It was active in providing assistance during the protests and riots that occurred in multiple American cities in 2020, largely related to the Black Lives Matter movement. It is also notable for supporting the violent Antifa movement.