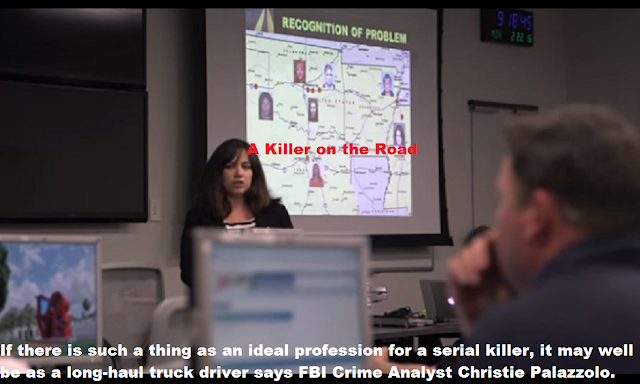 “We had an inordinate number of victims and offenders from this rather specific population pool,” Palazzolo explained. To make matters worse, these cases are extremely difficult to investigate. A long-haul driver can pick up a prostitute at a truck stop in Georgia, rape and murder her, and dump her body on the side of the road in Florida later that day. The victim has no connection to the area where she was found, and there may be no forensic evidence to collect because the crime was committed hundreds of miles away. The local police detectives investigating the case might have little experience dealing with a crime of this nature and may be faced with few, if any, leads. 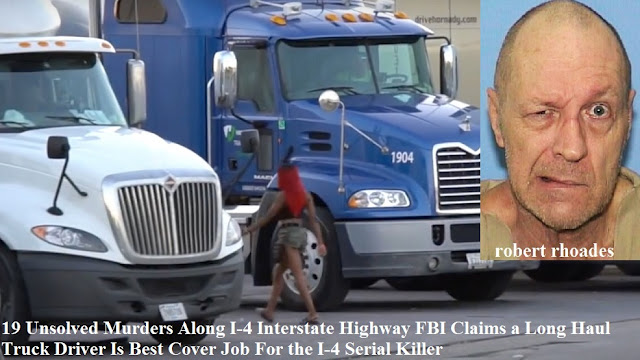 Serial killer and long haul truck driver Oscar Ray Bolin was executed January 7th 2016 for 3 known murders of young women in Tampa Fl. Oscar Ray Bolin was "A Killer on the Road", he traveled the I-4 Corridor, I-75 and I-85 in Florida and multiple interstates across the USA, how many more on Oscar Ray Bolin? HOUSTON: Long Haul Trucker and Serial Killer Robert B. Rhoades picked up young females then raped and tortured them and left their bodies in Texas, Utah and Illinois. From 1975 to 1990 Rhoades is believed to have tortured, raped, and killed more than 50 women, .”A state trooper near Casa Grande, Ariz., stopped on I-10 to check on a tractor-trailer with blinking lights in April 1990. He discovered Rhoades inside the cab with a hysterical naked woman who had been chained and shackled to a wall. She later told investigators that she’d been tortured and whipped, that Rhoades told her he was known as “Whips and Chains” and had been involved in such activity for years”. The cab of long haul truck driver Bruce Mendenhall and suspected serial killer was “awash with blood” belonging to 10 different people, said a prosecutor who charged him with murdering a missing woman. Carmen Purpura’s body has not been found, but the prosecutor said her blood soaked the seats in Bruce Mendenhall’s cab, and that so much of her blood was there she could not possibly be alive. 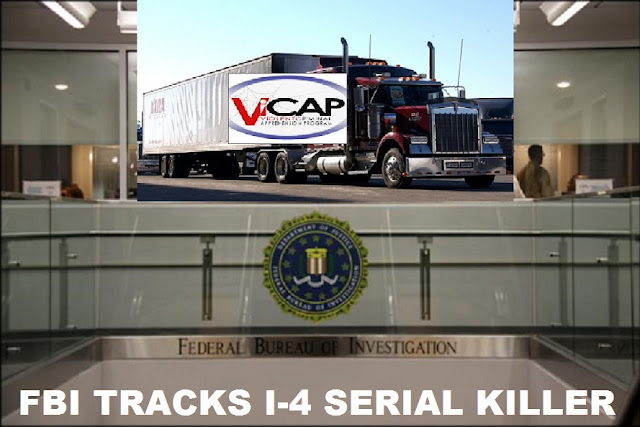 I have done extensive research into multiple unsolved murders, mostly young women involved with drugs and prostitution, of victims whose bodies have been found along the interstate highways of the USA. FBI Report Highway violence; In the past four decades, over 500 unsolved deaths and 41 attempted homicides are believed to be linked to serial killers who are using the nation’s highways as truckers to find and dispose of their victims. 33 bodies n Florida, 38 bodies in Texas and 37 bodies in California are the top 3 in the body count nation wide. The FBI’s breakdown by state, click link to see interactive FBI: http://i.usatoday.net/_common/_flash…&preview=false

FBI's seminar on Highway Serial Killings Initiative - The Violent Criminal Apprehension Program (ViCAP) consists of a database and web-based tool available to law enforcement agencies to link homicides, sexual assaults, missing person, and unidentified human remains that may be geographically dispersed, allowing police departments to better coordinate communication and investigative efforts on potentially linked crimes. The FBI maintains the database and our analysts assist investigators with case linkages and other analysis. Over 5,000 law enforcement agencies have participated in ViCAP—created in 1985—and have contributed more than 85,000 cases to the system.

In 2008 ViCAP made their database available to all law enforcement agencies through a secure internet link, providing real time access to the database and allowing agencies to enter and update cases directly into the database. ViCAP’s mission is to facilitate cooperation and coordination between law enforcement agencies and to provide support to those agencies in their efforts to apprehend and prosecute violent serial offenders, especially those who cross jurisdictional boundaries. 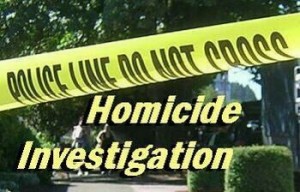 FBI Crime analysts—specially trained to study the database with the goal of identifying serial offenders—have developed extensive timelines on potential highway serial killer suspects and have provided this information to law enforcement nationwide. ViCAP requests that law enforcement agencies forward any information about cases meeting any of the following highway serial killings criteria:
1). Homicide victims whose remains were recovered along a highway or location associated with a highway such as a rest stop, gas station, or truck stop;
2). Kidnapped or missing persons whose last known location was along a highway;
3). Victims of sexual assault with a connection to a highway or highway location; and
4). Truck drivers or other individuals undergoing investigation or arrested for murder, kidnapping, or sexual assault of one or more victims along a highway or at a location associated with a highway. 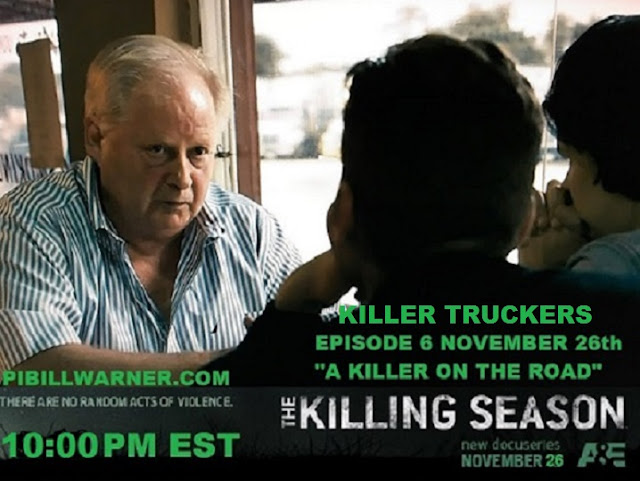 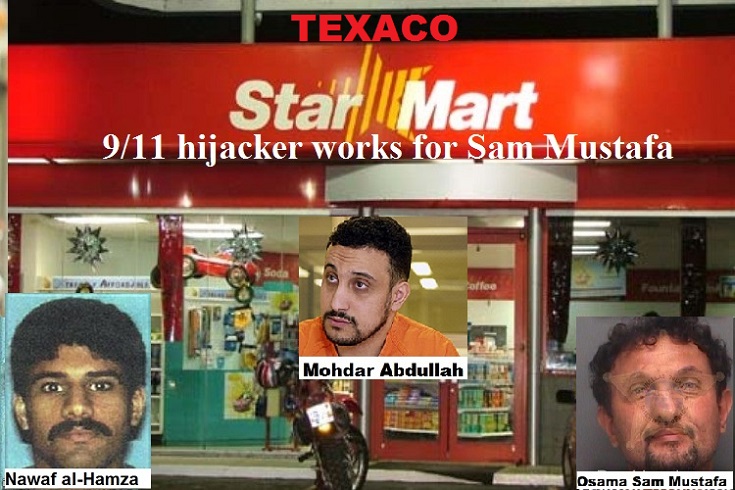 La Mesa CA 9/11 Connection: Mohdar Abdullah, Omar Bayoumi, Imam Fahad Al-Thumairy, Imam Anwar Al-Awlaki, Nawaf al-Hamza, Flight 77, Osama Sam Mustafa, Sam's Star Mart Texaco. In a trove of seemingly disorganized evidence taken from San Diego Saudi spy Omar Bayoumi’s home in Birmingham, England, in 2001 a detective found a spiral notebook that contained a hand-drawn aviation diagram of a plane descending to strike a spot on the ground. An F.B.I. agent who had studied aeronautical engineering concluded that the diagram showed a formula for an aerial descent like the one performed by Flight 77 piloted by 9/11 terrorist Hani Hanjour, the jet that Hazmi and Mihdhar hijacked, before it struck the Pentagon. To Encore FBI agents, it suggested that Imam Bayoumi might have known about or even possibly been involved in operational details of the plot. Hani Hanjour was the Saudi Arabian terrorist hijacker-pilot of American Airlines Flight 77 on 9/11, he received his commercial pilot certificate in 1999 in Phoenix AZ. Osama bin Laden or Mohammed Atef identified Hani Hanjour at an Afghanistan training camp as a trained commercial pilot and selected him to participate in the September 11 attacks. Hani Hanjour entered the United States on November 16, 1997, taking English courses in Florida, then returning to Phoenix, where he shared an apartment with 9/11 hijacker Nawaf al-Hazmi. An FBI informant named Aukai Collins claims he told the FBI about Hanjour's activities during 1998, giving them Hanjour's name and phone number, and warning them that more and more foreign-born Muslims seem to be taking flying lessons. In May 2000, a third person accompanied Nawaf al-Hazmi and Khalid al-Mihdhar to Sorbi's Flying Club in CA where he waited on the ground as they took a flight lesson. It has been theorized this may have been Hani Hanjour. 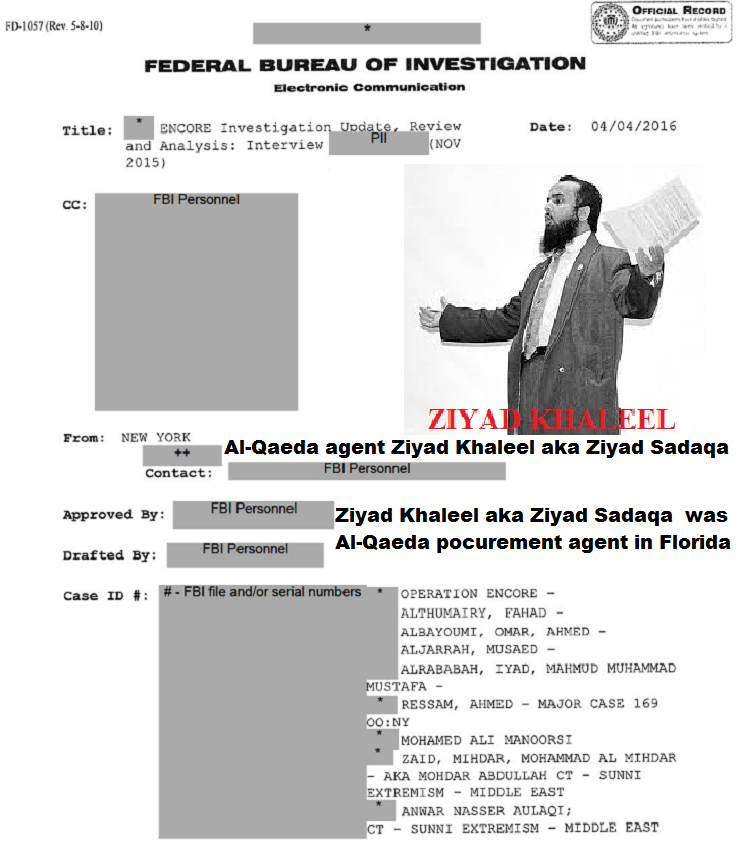 Nationwide support network for 9/11 hijackers in the USA was the Saudi Ministry of Islamic Affairs overseen by Muslim Missionary Mutaeb Sudairy and local Imams like Fahad Al-Thumairy San Diego, Anwar Al-Awlaki San Diego - Falls Church, and Imam Muneer Arafat Sarasota Fl. Roving al-Qaeda Agent Ziyad Khaleel links to all these Imams, he was a roommate of Mutaeb Sudairy in 2000 and Muneer Arafat in 1998. Operation Encore 9/11 Doc Released By FBI: Ziyad Khaleel ID as Al-Qaeda Agent in Florida, links to Sarasota. In 1999 Al-Qaeda agent Ziyad Khallel aka Ziyad Sadaqa's roommate was Muneer Arafat. Ziyad Khaleel and Muneer Arafat were fundraisers for Islamic African Relief Agency (IARA) formerly headquartered in Columbia, MO and the Holy Land Foundation in Texas both designated terrorist supporters of Hamas and Al-Qaeda. Islamic African Relief Agency (IARA) is listed in the Operation Encore 9/11 Doc released yesterday by the FBI as funding Al-Qaeda with Ziyad Khallel handling wire transfers to Osama bin-Laden. IARA was a member of a larger organization headquartered in Sudan that was itself an al-Qaeda supporter. The IARA connection to al-Qaeda dated back to well before Sept. 11, 2001; it arose while Osama Bin Laden was a guest of the government of Sudan. 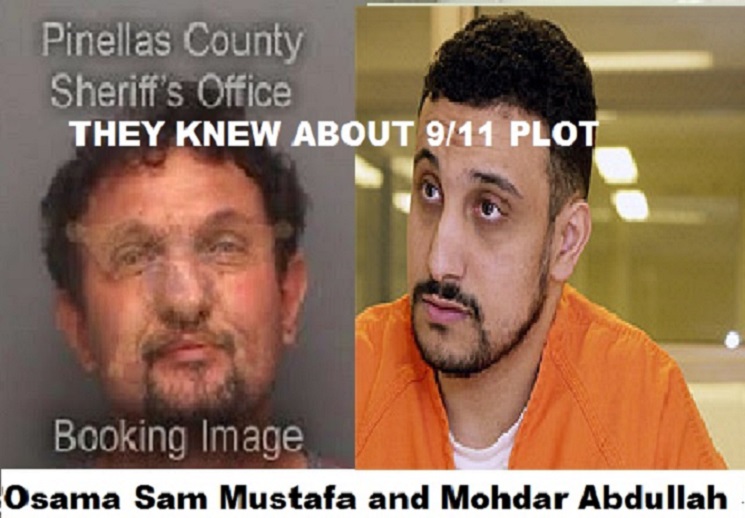 During the investigation of Mohamed Johar, he identified two other individuals as having contact with 9/11 hijackers al-Hazmi and al-Mihdhar in San Diego: Mohdar Abdullah and an acquaintance of Mr. Johar's named Akram Alzamari. Mohdar Abdullah worked at Osama Sam Mustafa's Texaco Star Mart gas station with 9/11 hijacker Nawaf al-Hazmi. Other Gas Station Employees May Know of 9/11 Plot - Mohdar Abdullah may have learned of the 9/11 plot as early as the spring of 2000. Additionally, according to one witness, Abdullah, Osama Awadallah, Omar Bakarbashat, and other Sam's Star Mart Texaco gas station employees will appear to show foreknowledge of the 9/11 attacks one day before they take place. 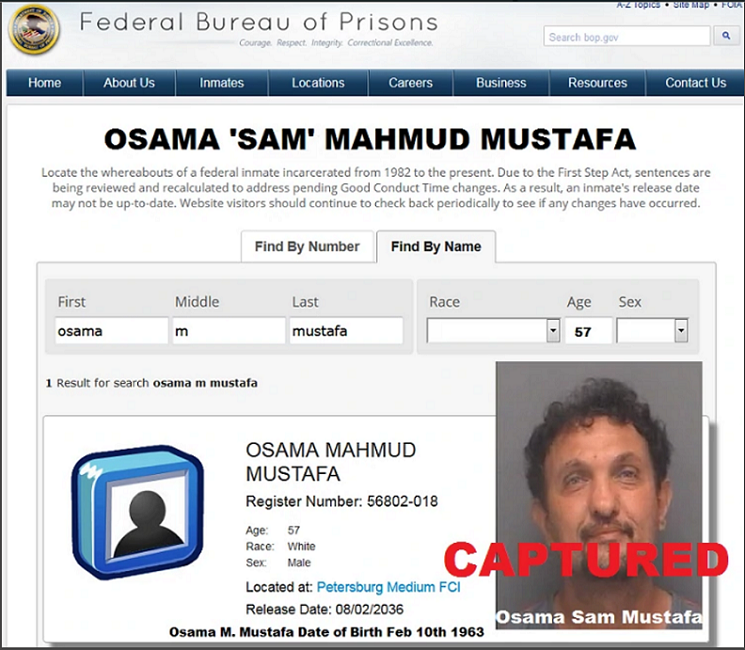 Tampa fugitive Osama Sam Mustafa described in secret FBI 9/11 Operation Encore report had been captured in Amman Jordan, he had contacted Sarasota private investigator Bill Warner prior to his arrest. A fugitive and subject of Operation Encore, the FBI’s once-secret probe of suspected Saudi involvement in 9/11, Osama Sam Mustafa was captured without fanfare in Jordan and returned to the U.S. to start serving an unrelated 20-year sentence for fraud. Osama “Sam” Mustafa, 57, is identified in the 9/11 Commission report as the owner of Sam’s Star Mart Texaco gas station in La Mesa, CA where Saudi suicide hijacker Nawaf al-Hazmi and several subjects of interest in the FBI’s investigation worked in the fall of 2000. 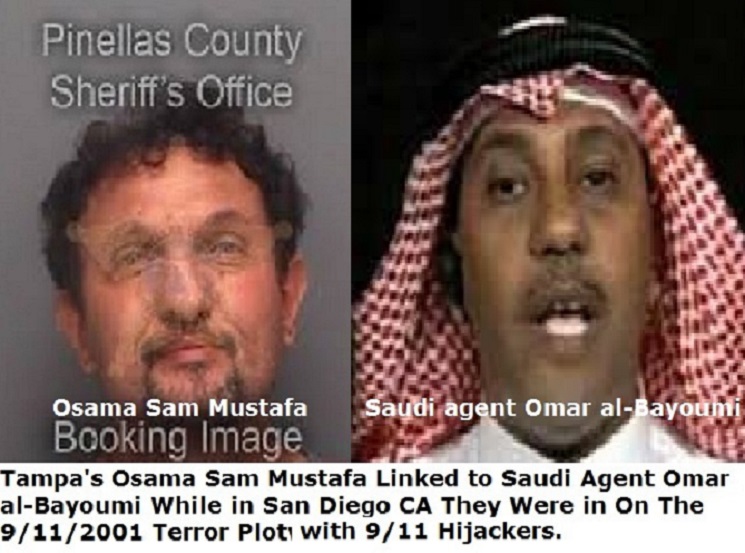 On September 24th, 2012 FBI Agents in New York City considered potential charges for Osama ‘Sam’ Mustafa for providing ‘Material Support’ to the 9/11 hijackers while in San Diego CA. Osama Sam Mustafa and Star Mart station manager Iyad Kreiwesh “have both been the subject of FBI counterterrorism investigations,” the 9/11 report says. Sam Mustafa moved to Tampa from San Diego in late 2002 to be among like minded individuals, he was one of the targets of the ICE 2002 - 2003 Operation Green Quest investigation into a terrorist support network in Sarasota Fl.