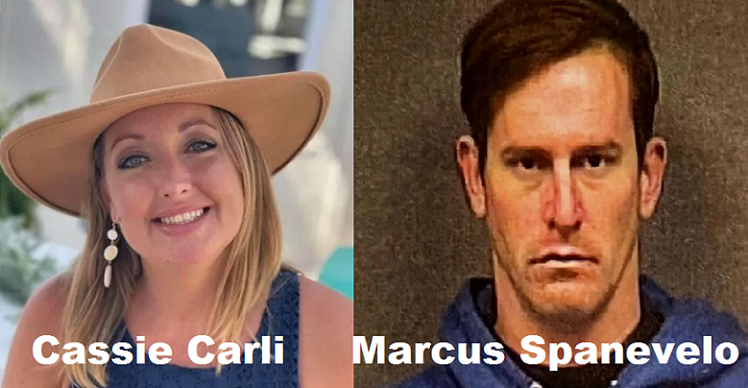 Child Custody Case Gone Bad, Appears Cassie Carli Murdered by Ex Boyfriend Marcus Spanevelo Best To Have Private Investigator involved. I have worked hundreds of child custody cases over the last 27 years and when they go bad, and you know it's gone bad, protection for the woman at the neutral drop off point for the child is essential. "Cassie Carli had previously felt 'extremely' unsafe and nervous around her ex, according to her sister". She never should have met the man by herself! I have gone with several female clients to these neutral drop off points in my car and stayed right near the client's car until the exchange was made. Just the fact that someone was with the woman at risk, seemed to quell any thoughts of retaliation by the ex. Licensed private investigators in Florida with a statewide concealed firearm license can do work as a body guard.

Cassie Carli went missing after dropping off her four-year-old daughter to her ex boyfriend Marcus Spanevelo and sending a mysterious text message about "car troubles". Cassie Carli, 37, was last seen at Florida’s Navarre Beach in the Panhandle, as she handed her daughter Saylor, 4, to the girl’s father on Sunday evening March 27th in the parking lot of a restaurant called Juana’s Pagodas in Navarre Beach, according to police. The girl’s father, identified by friends as Marcus Spanevelo was living in Panama City Beach Fl, was also missing, local broadcaster ABC27 reported. According to a GoFundMe page, Ms Carli was involved in a legal dispute with Mr Spanevelo over access to their daughter in 2021. The page raised $1,280 of a $10,000 goal for legal fees she wrote were spent on an attorney that helped regain custody of Saylor. "For over two weeks, I had no contact with my daughter or knowledge of her whereabouts," Ms Carli alleged.

UPDATE SUNDAY APRIL 3rd 2022. NAVARRE BEACH, Fla. – Cassie Carli, a Florida mother who disappeared one week ago after meeting the father of their 4-year-old daughter, was found dead in a shallow grave in Alabama on Saturday evening, Santa Rosa County Sheriff Bob Johnson said Sunday. Her ex-boyfriend, Marcus Spanevelo, was arrested Saturday in Tennessee and charged with tampering with evidence, destruction of evidence, and giving false information concerning a missing person investigation. Spanevelo could face additional charges after an autopsy is completed Monday, which will reveal the cause of death.