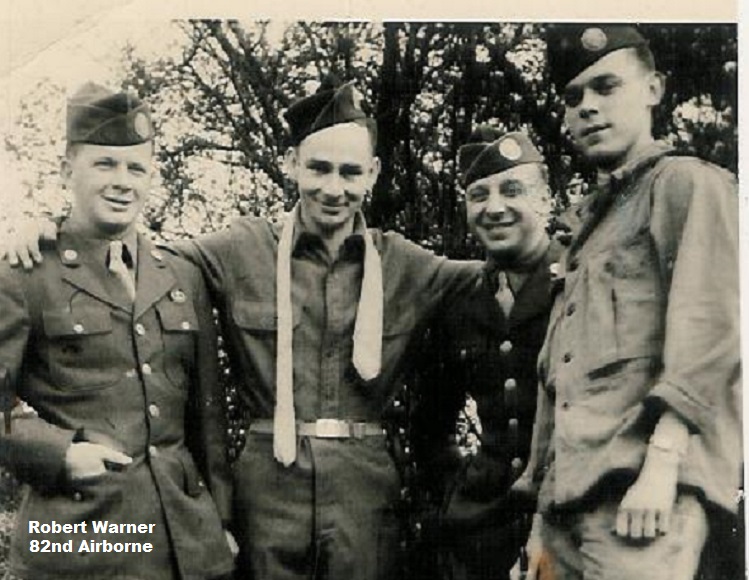 WWII D-Day Normandy June 6 1944: Paratrooper Robert 'Bobby' Warner 82nd Airborne Division All American (AA), 3rd Battalion, Company G, 507th Parachute Infantry Regiment (PIR) was there in Sainte Mere Eglise France. In Normandy, the 82nd gained its first Medal of Honor of the war, belonging to Private First Class Charles N. DeGlopper of the 325th GIR. By the time the division was relieved, in early July 1944, the 82nd had seen 33 days of severe combat and casualties had been heavy. Losses included 5,245 troopers killed, wounded, or missing, for a total of 46% casualties. Major General Ridgway's post-battle report stated in part, "33 days of combat action without relief, without replacements. Every mission accomplished. No ground gained was ever relinquished". PFC Robert 'Bobby' Warner made all 3 combat jumps with the 82nd Airborne in Western Europe during WWII, Operation Overlord Normandy on D-Day France 6/6/1944, Operation Market Garden in the Netherlands 9/17/1944, and Operation Varsity in Rhineland Germany the last jump 3/24/1945, all under heavy machine gun fire by Nazi SS troops. Combat wounded PFC Robert 'Bobby' Warner also fought with the 82nd Airborne at the Battle of the Bulge in the Ardennes forest, Belgium 12/16/1944. As soon as Robert Warner joined the UD Army, he wanted to be in the paratroops, he was a volunteer, so they sent him to Fort Benning, Ga. for parachute training. In the early hours of June 6, 1944 82nd Airborne Division soldiers who dropped behind German lines were the first arrivals in the Normandy invasion. By the end of the day, about 176,000 soldiers from the United States, Britain, Canada and France stormed ashore. 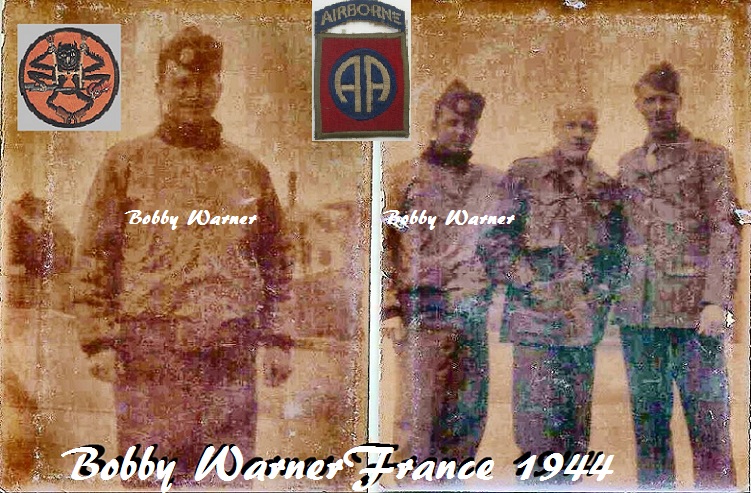 The 507th Parachute Infantry Regiment 82nd Airborne "All The Way!", "Death From Above", "Eighty Deuce". In the predawn hours of June 6, 1944, Trooper Robert F. Warner and the division parachuted into the marshes and hedgerows of the Cotentin Peninsula and into Ste.-Mère-Église behind a stretch of coastline that would forever be known as Utah Beach. 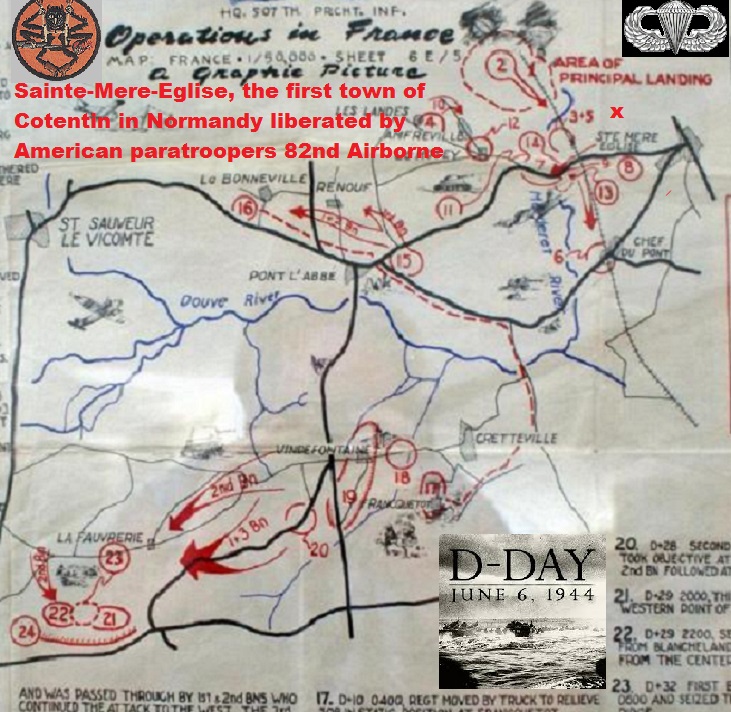 In the early hours of June 6, 1944, paratroopers from the 82nd Airborne Division, All American (AA) dropped into Ste.-Mère-Église, a town of 1,500 astride a road network a few miles from the invasion sector called Utah Beach. Their mission was to block German troops from attacking the American infantrymen arriving at dawn in the vanguard of the D-Day invasion. By about 4:30 a.m., the paratroopers had seized the town, and Lt. Col. Edward Krause of the 505th Parachute Infantry raised an American flag outside the town hall. 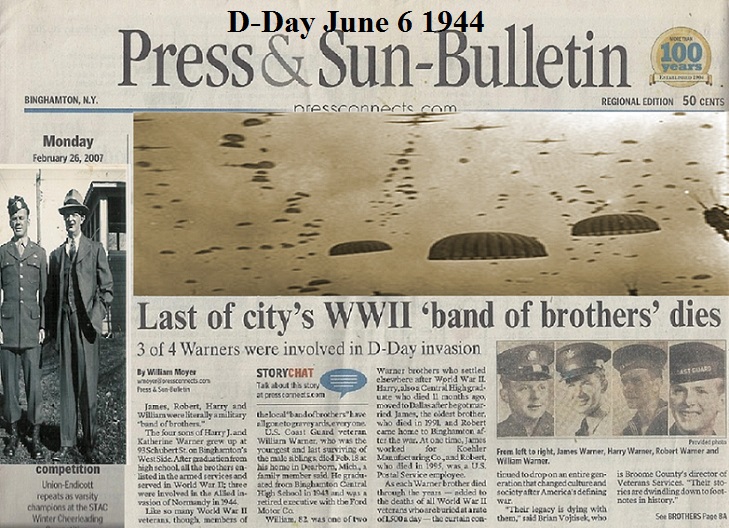 Paratrooper Army Pvt. Robert Warner, who was in his early 20s at the time, landed in Normandy (Ste.- Mere- Eglise) with the 507th Parachute Infantry (82nd Airborne). He had enlisted in April 1942 after graduation from the former St. Patrick Academy High School in Binghamton. A newspaper story reported him as getting injured in combat, although his injuries were not life-threatening. During the next 35 days, the 82nd experienced intense combat in battles at places with names such as Ste.-Mère-Église, Hill 30, and a little stone bridge at La Fière. 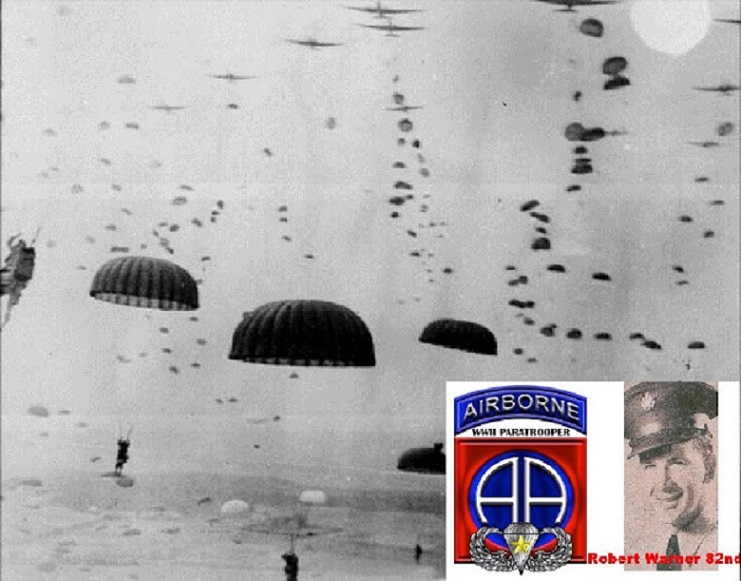 “Once you have tasted flight, you will forever walk the earth with your eyes turned skyward, for there you have been, and there you will always long to return.”- Leonardo da Vinci. Robert F. Warner is a member of a very select airborne fraternity. Robert F. Warner was a 20 year old volunteer for the US Army 507th paratroopers, the 82nd Airborne ‘All-American’ Division, he survived three Combat Jumps during WWII in Europe from 1944 to 1945, starting with D-Day in Normandy June 6th 1944, and fought hand to hand combat in the Battle of the Bulge in the Ardennes forest, Belgium 12/16/1944. Even among elite paratroopers, such an achievement is noteworthy. 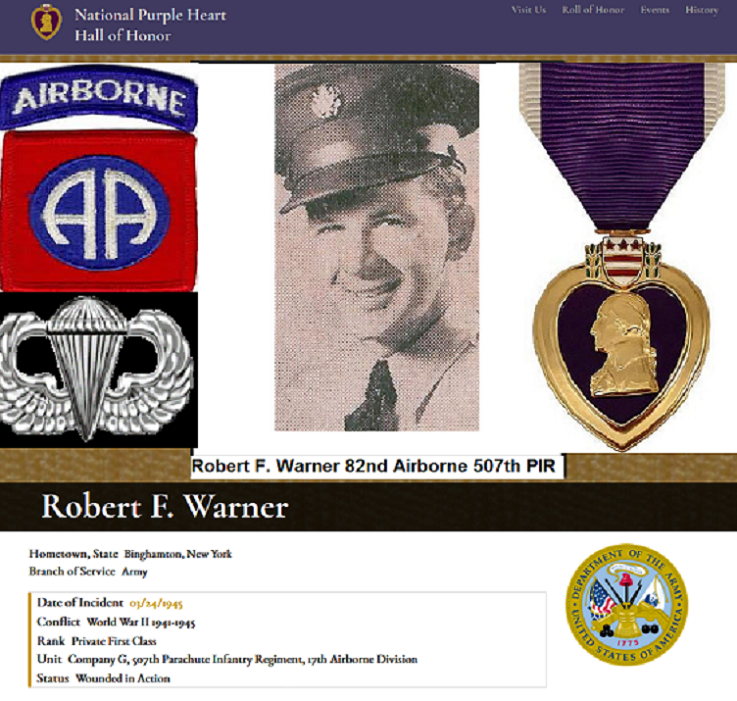 By March 24, 1945 Robert F. Warner was serving as a private in Company G, 507th Parachute Infantry Regiment, 17th Airborne Division. On that day, his unit was dropped by parachute across the Rhine river near Fluren, Germany. PFC Robert Warner 82nd Airborne was wounded during the action and received a Purple Heart medal. Robert F. Warner, 3rd Battalion 507th Parachute Infantry Regiment, Company G, was a proud veteran of the 82nd Airborne till the day he died in Sarasota Fl Sep 3rd 1995 at the age of 74.