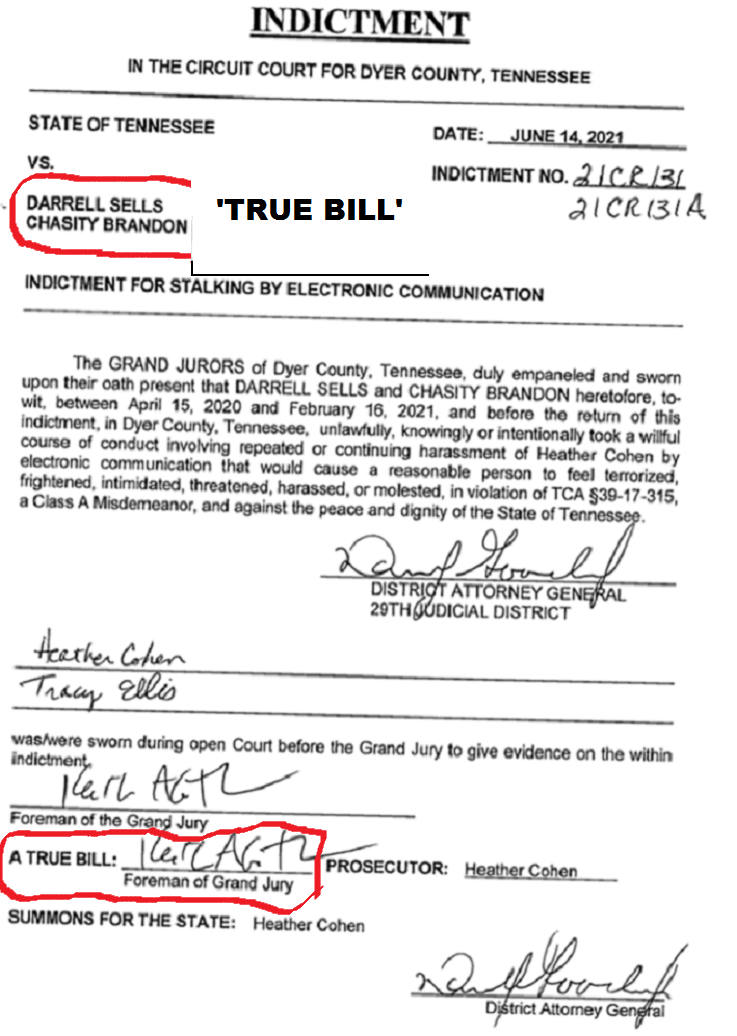 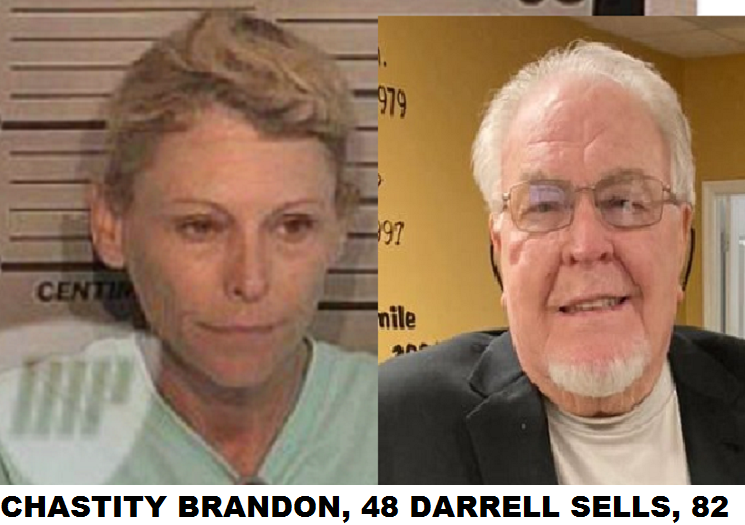 photo credit Chastity Brandon Dyer County Jail, Darrell Sells FACEBOOK.
Local News: Dyer County Grand Jury indicts two individuals https://www.stategazette.com › story Dyersburg State Gazette Writes: Friday, June 18, 2021. On June 14, the Dyer County Grand Jury indicted Darrell Sells and Chastity Brandon on a charge of stalking by electronic communications. According to the indictment, Sells and Brandon between April 15, 2020 and February 16, 2021, “unlawfully, knowingly or intentionally took willful course of conduct involving repeated or continued harassment of [victim] by electronic communication that would cause a reasonable person to feel terrorized, frightened, intimidated, threatened, harassed, or molested, in violation of TCA 39-17-315.” The indictment added the charge, if convicted, is a Class A misdemeanor. Both Sells and Brandon are scheduled to appear in Dyer County Circuit Court on Monday, June 21 at 1 p.m. for arraignment. TODAY June 6/21/2021 District Attorney General Danny Goodman, Jr. announced he would be recusing himself from the case. In addition, to Circuit Court Judge Lee Moore also recused himself from the case. Goodman said the victim in the case requested a restraining order and no contact for both Sells and Brandon. Judge Moore set the appearance date for August 17, 2021. 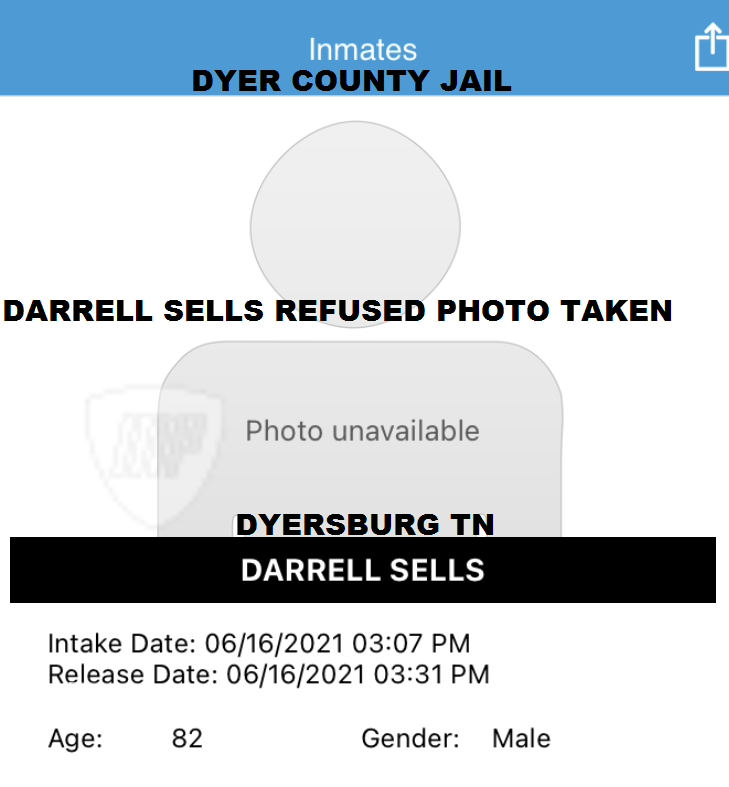 It appears that Darrell L. Sells, 82, of Dyersburg TN who was arrested for 'Stalking by Electronic Communication' by Dyer County Sheriff deputies on June 16th, is president of D L Sells Inc, which also operates under the name McDonald's, located in Dyersburg, Tennessee. This organization primarily operates in the Fast-food Restaurant, Chain business / industry within the Eating and Drinking Places sector. This organization has been operating for approximately 45 years. D L Sells Inc is estimated to generate $7.9 million in annual revenues, and employs approximately 8 people at this headquarters location and 200 total employees across all locations. Darrell Sells prior bad acts include death threat to Frank Burnett during lawsuit in Dyersburg TN in Sept 2005, see more below. 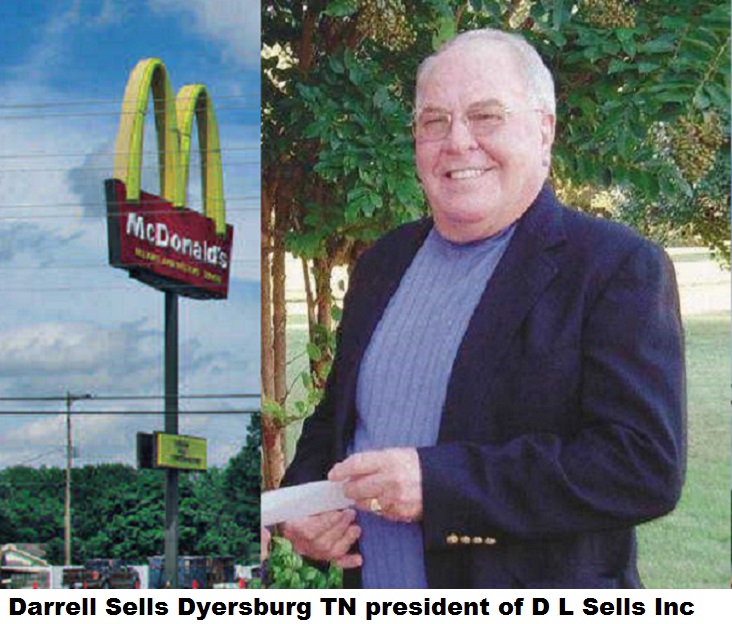 photo credit Dyersburg State Gazette, Darrell Sells, D. L. Sells Inc McDonald's.
STATE GAZETTE Local News: Burnett fears threat by Sells over loan accounting https://www.stategazette.com › story September 7th, 2005 — Frank Burnett fears death threat by Darrell Sells over loan accounting: Attorney Edward K. White III of Nashville ... BILL HILES reporter State Gazette. Dyersburg businessman Frank Burnett is willing to testify in a lawsuit. The bulk of Friday's three-hour hearing was devoted to a motion by attorney Edward K. White III of Nashville that Darrell Sells of D. L. Sells Inc be mentally evaluated and a guardian be appointed to look after him. "Mr. Burnett is not able to participate in his defense," White said. "That is caused by Mr. Sells' death threats to Mr. Burnett." White called Darrell Sells as a witness. When asked by White if he had ever threatened to kill Burnett, Sells replied "Hell, no" and Stafford admonished him for cursing on the witness stand. Darrell Sells admitted he had said he would "blow a hole in Frank Burnett's rear big enough to drive one of his trucks through," but said he and Burnett had met amicably after church about six weeks ago. White next called as a witness Judith Kirkland, an employee of the business run by Burnett and Joslin. She testified that in February or early March of 2005, Darrell Sells told her he was frustrated with not getting an accounting of the loan-package business from Burnett and had "said he, Darrell Sells, could kill Frank Burnett." "When I told Darrell Sells, he shouldn't say that, Darrell Sells said, 'I will hurt him real bad,'" she testified. Kirkland said Sells repeated the threat four to six weeks later, using the same words. 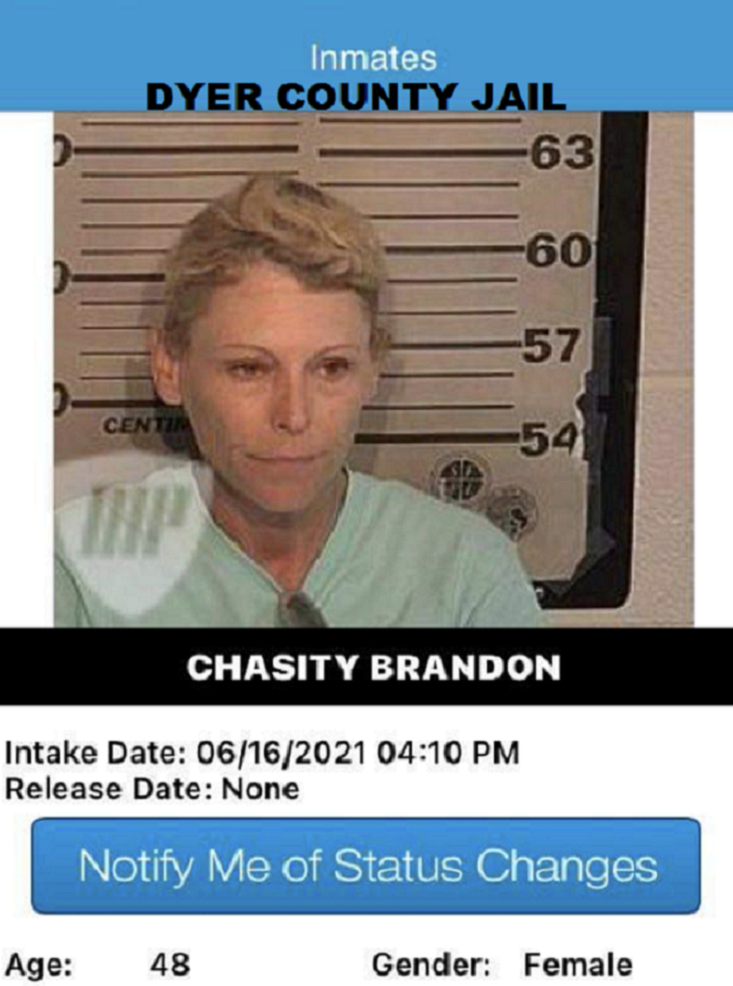 photo credit Chastity Brandon Dyer County Jail.
Chastity Nicole Brandon, 48, aka Chastity Bryan, has had multiple run-ins with the law. It appears that she has multiple DUI arrests and she had her private investigator license revoked by the Tennessee Private Investigation and Polygraph Commission Board. Oct 18, 2020, Chastity Brandon had been working as a private investigator in Dyersburg TN but as of today, 10/18/2020 her license is not valid. In Tennessee, a DUI is a Class A misdemeanor charge with a minimum sentence for a first conviction of DUI is 48 hours in jail, but can be as much as 11 months, 29 days in jail with fines, court costs, loss of license for a year and community service assessed. At the Tennessee Private Investigations and Polygraph Commission Meeting of 10/15/2020 concerning the actions of Private Eye Chastity Nicole Brandon one of the board members, Jesse Gentry Assistant General Counsel, read the legal report on Private Eye Chastity Nicole Brandon who had refused to cooperate with the investigation.

According to Jesse Gentry Assistant General Counsel Tennessee Private Investigations and Polygraph Commission at the 7:14 min point in the above video, Chastity Brandon committed a 'laundry list' of violations including operating a Private Detective Agency without a license. Jesse Gentry went on to list multiple violations committed by Chastity Brandon using a Facebook Page called 'Cobra Justice' posting false and inflammatory articles about individuals in Dyersburg TN ('Stalking by Electronic Communication'). Jesse Gentry made note of several prior arrests of Chastity Brandon and indicated she had used multiple 'dates of birth' and multiple 'social security numbers'. The Commission voted unanimously to pursue formal charges and agreed to voluntary revocation of private investigator license of Chastity Nicole Brandon in Dyersburg TN. Final comment by one of the Board Members, "whatever it takes to get this woman out of the business". 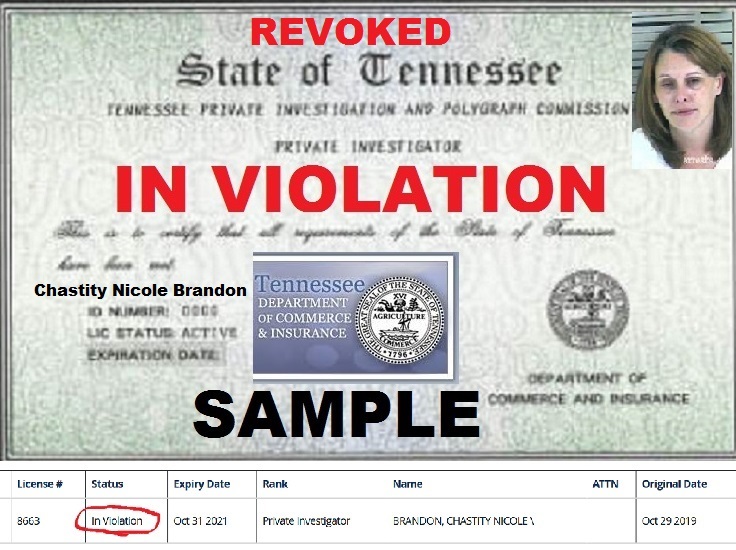 Ms Brandon claimed she only had 4 beers. Ms Brandon was advised and read complied consent which she refused to consent to a chemical test. Ms Brandon was given the standard field test for sobriety but it had to be terminated as she was falling into the roadway. She was taken into custody and upon arrival at the jail she nearly fell again while walking into booking." Disgraced Private Investigator Chasity Brandon in Dyersburg TN will still face formal charges after revocation of her PI License on October 15, 2020. COBRA JUSTICE Facebook Page run by Disgraced Private Investigator Chasity Brandon in Dyersburg TN faces formal charges from ongoing investigation OF RUNNING AN UNLICENSED DETECTIVE AGENCY and revocation of her PI License. 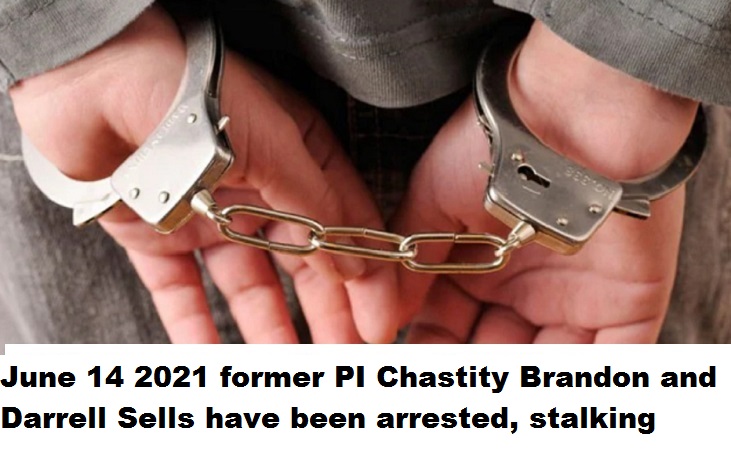 During the Private Investigations and Polygraph Commission meeting that was publicized on 10/15/2020 Jesse Gentry Assistant General Counsel made a statement to the effect that Chastity Brandon had taken confidential work product that included a witness list from a PI Firm she had been working for in Dyersburg that relates to an unsolved murder and 'gave' it to someone not in law enforcement for possible publication. Jesse Gentry made note of several prior arrests of Chastity Brandon. Any private investigator that has his or her PI license revoked, is arrested for DUI, takes without permission confidential work product for publication, and is under investigation by the State Licensing Division that regulates private investigators for operating an unlicensed detective agency (all in the same year) is not someone who could be relied upon for obtaining reliable, accurate and truthful information. DEVELOPING STORY. CHECK BACK FOR DETAILS

Email ThisBlogThis!Share to TwitterShare to FacebookShare to Pinterest
Labels: Former PI Chastity Brandon and Darrell Sells have been Indicted and Arrested for Stalking by Electronic Communication in Dyersburg TN
Location: Dyersburg, TN 38024, USA